France has seen a steady rise in house prices. In the second quarter of 2021 property prices rose by 5.8% year-on-year, according to the National Institute of Statistics and Economic Studies (INSEE). The price increase in the first quarter of 2021 was also 5.8%. In 2020, the figure was 6.4% in the fourth quarter, 5.2% in the third quarter and 5.6% in the second quarter. 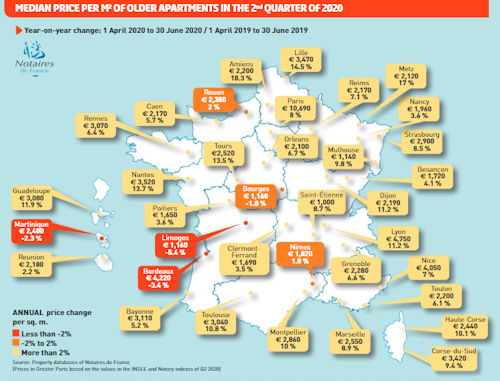 In Paris, property prices have fallen symbolically and continue to be exorbitant. The cost of secondary housing in the French capital fell by 0.2% for the year in the second quarter of 2021. It is possible to buy a flat in Paris for an average of €10,650/m², according to La Chambre des Notaires de Paris.

According to a study conducted by the University of Paris and King’s College London, almost half of Parisians consider their city too expensive to live in. At the same time, 43% of those surveyed believe they could find a better quality of life elsewhere.

Home prices in France rose by 150% in 10 years during the long housing boom which lasted from 1997 to 2007. Against the backdrop of the financial crisis, the market began to weaken in 2008. Since then the market has seen a moderate fall in prices followed by a moderate rise. After falling by an average of 1.7% per year between 2012 and 2015, house prices started rising again in 2016. Despite the pandemic, French property prices rose by 6.4% in 2020, the strongest increase since 2010.

With a view to the sea and the mountains: how to buy an apartment in Georgia
How Real Estate Kings Will Earn in 2022
Menu